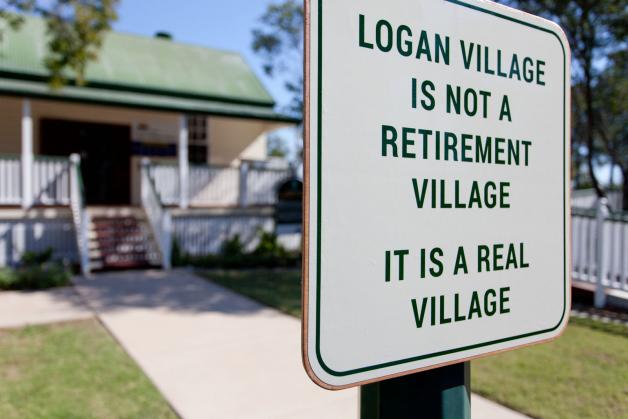 A visitor to the Logan Village Green in September 2014 will not only see a charming, mid-nineteenth century historical site but will also encounter, amidst interpretative signage, commemorations, warnings and various public notices, a series of authoritative signs with decidedly unofficial declarations. Alternating between anecdote, contemplation, reverie and provocation, the signs reveal the memories, hopes and fears of the contemporary villagers that are fiercely proud of their community but are anxious of its future amidst encroaching urbanism.

The signs are derived from a series of conversations between artist, Natasha Narain, and members of the Logan Village Library Book Club – conversations that began with the oral history of the site published in Doreen Wendt-Weir’s Barefoot in Logan Village, but rapidly shifted to concerns about the aging population, the increasing insensitivity to the environment, the recent development of walled communities on the village outskirts, and the impact of a growing urban culture within the semi-rural village with strong community values.

The signs are a public offering from the club and are of texts authored or collected by its members. W.O.R.D.S. provides a glimpse of a community in transition, reflecting on cherished memories, history and strongly-held beliefs, in contest with a puzzling and indeterminate future.

The directors and artist would like to thank the book club members for their grace, perseverance and generous contributions, without which the project could not exist.

Special thanks are also due to Lorraine Cox, Wendy Duke and Mary-Ellen McCarter for their kind assistance and support.

Natasha Narain's and the Logan Village Library Book Club's collaborative project, W.O.R.D.S., will open in the village greens on the 14th of September, during the village's annual Music and Heritage Festival, and will remain in place until the 28th of September.

Using Doreen Wendt-Weir's book, Barefoot at Logan Village, as a starting point, Natasha Narain will work with members of the Logan Village Library Book Group to develop a project to be completed for the annual Logan Village Music and Heritage Festival in September, 2015.